My sweet boy turned 12 years old on March 16th. He is now a pre-teen heaven help me if he starts with that crappy teenage attitude problem that I have witness from kids his age. So far we have avoided it and keeping my fingers crossed that he will continue to be attitude free.

Every year I try to make his actual birthday itself special so every year I let him choose what he wants to do on his special day,this year he chose to go to a movie,I can hardly sit through and still for 2 hours at a movie (God love him he chose The Great and Powerful OZ,in 3d of course,because he knew that I wanted to see it and that it would make sitting sorta of still bearable for me). What a wonderful sweet kid to think of his Mama. Then we went out to his favorite restaurant Red Lobster.

This year due to an entire weekend work conference That I had to attend and Easter falling so early,we had to postpone his actual birthday party until last weekend. Each year I let him choose his party theme, this year he had a toss up of either a walking dead party or Minecraft party. Thankfully he chose the later. I was so glad that it was easy to work with and make happen for him.

Every year we purchase a cake from a local baker Cakes By Stephanie, the yummiest cakes on earth,I swear it must have weigh 10lbs,the only issue was that for each character she charges $15 yeah that's right I thought that was a bit too high the cake would have cost me a jaw dropping $175. So I had her make the cake and I made all of the minecraft characters out of fondant. So here goes.......... 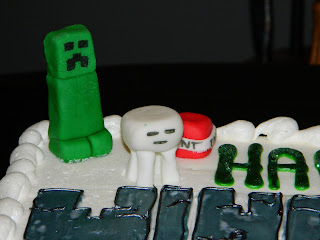 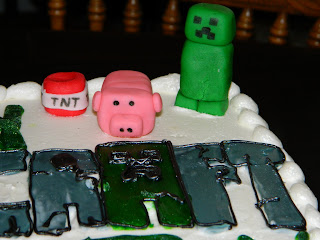 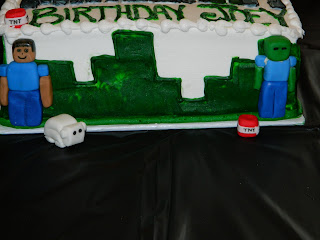 He loved it!!!  I can't even tell you how many times he thanked me. It's nice having a thoughtful and great full child. We even made Mine Craft party decorations....... 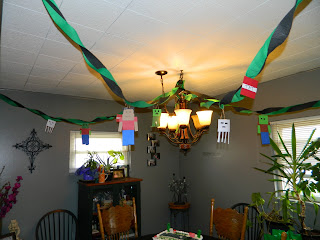 Here he is blowing out his candles and making a wish I hope it was a good one because he is so very deserving of his wishes coming true. Oh and every year I obsess over finding cool and unusual candles for his cake,this year I found candles that the flame itself burned the color of the candle,unusual things like that make me Happy!! 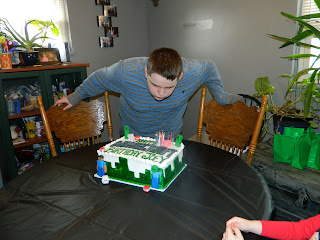 Of course then opening his gifts...... He is NEVER short on gifts!!! 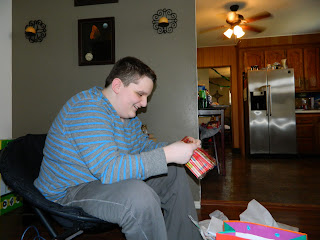 Since he now is so tall that he dwarfs most of my family he had to have a pictures to witness just how tall he is compared to everyone.....


And the next picture is his goal of height,he won't be happy until he is taller that his cousin Toni who is one of the tallest in the family standing at nearly 6' tall I think 5'11" tall. He's almost there!!! 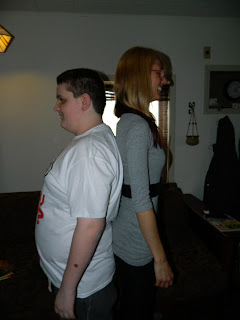 And of course I couldn't leave out a picture of my feisty little grand niece Madi Rain. Joey adores her,he is such a sucker for her. When they are together it looks almost comical because he is so big and tall and she is so tiny,but the one who bosses him around and he loves her so much he just let's her. 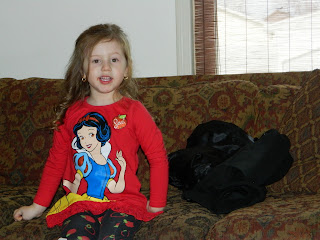 I just wanted to share the celebration of  My son Joey who has brought such meaning,light and joy to my life,he has made me a better person just by being blessed with him. The day God gave you to me will always be the best day of my life. I love you Joey and am so proud of the young man that you are becoming,you mean the world to me. As Madi would say "you are beautiful like diamonds in the sky"!

Posted by Maria Rosa Sharrow at 10:54 AM

Maria Rosa Sharrow
My name is Rosa and I am a mom to a very sweet young man who keeps me young and on my toes. By day I manage a health food store (which I love doing) and by night or whenever I can find a little time, a jewelry artist. I have so many interests and hobbies that it's hard to find enough time for them all and it doesn't help that I have a touch of ADHD either, if only I required NO sleep.My 2 real passions are making jewelry,not just typical but things a little outside the box,and vintage things. I love to go to tag and rummage sales and thrift shops so many cool things to see and vintage things give me inspiration. Along with my sister I run 2 etsy shops one is mostly Jewelery and such and the other is vintage goodies!