My sweet little boy recently turned 11.  He thinks it's so funny that at 11 years old he is just as tall,(actually taller than me, but I will not admit it to him just yet). He might not be little anymore but he still is so very sweet. He still holds my hand and hugs and kisses me every morning when I drop him off at school no matter if his friends are there or not. He is his own person and really could care less what others think of him, personality wise he's like me in that aspect because I don't much care what others think I am always true to myself and my beliefs. He makes me proud every single day. He has a kind disposition,is caring,kind and so stinking funny and clever he never ceases to entertain me!
So every year for his birthday we have some sort of theme, since he's been old enough to choose I have left it up to him.

So when I asked him this year what theme he wanted he informed me that he would like a Family Guy party.  I told him that that might not fully be an appropriate theme since there were to be elderly family members and young children in attendance. Please don't think less of me but  I do admit that I love Family Guy. I love the absurdity,vulgarity and crassness of it all. I am truly a juvenile in mind and at heart. For example at a work meeting someone mentioned something about a duty  and I almost peed myself laughing,of course I heard (doody). So that being said I told him to mull it over and think of something else, after telling him it would be okay as a theme when he was older.

So all of about 2 seconds later he said how about Zombies. I had already shot down his first choice and him loving zombie killing games and the show The Walking Dead,which by the way my husband and I like also,I gave in so zombies it was. I tried to make gruesome food to match the zombie theme. So my ideas and creations were these things (some pictures will follow)
1- I added green juice to a surgical glove tied it and stuffed it in the freezer. I them made punch and floated the "Hand" in the bowl and added gummy worms (please note that gummy worms don't float) and they swell after a while good idea,bad out come.
2.Deviled eyeballs  aka deviled eggs with a slice of black olive.
3. I made green chocolate covered pretzel rods and used a pipping bag to draw the knuckles and a red gummy as a fingernail to make "zombie fingers".
4. I made "zombie brain" which was a hollowed out cauliflower with guacamole dip to fill the hollow and I added some red licorice strings threaded into the cauliflower to mimic veins.
5.I arrange cocktail shrimp and sauce with a touch of gelatin and roasted red pepper slice to make yet another brain (this one being human of course.
6. The most awesome local cake decorator and shop "Cakes By Stephanie" made the zombie cake. If you live anywhere near me in Michigan I highly recommend her cakes they are about 8" thick and so moist and delicious I get excited just thinking about eating a Stephanie cake,if you have ever had one you know what I mean.

So here comes the pictures I hope you enjoy them as much as My Joey did!! 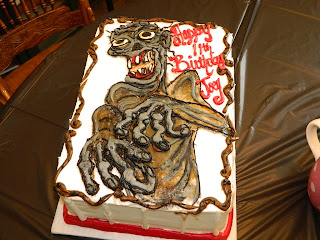 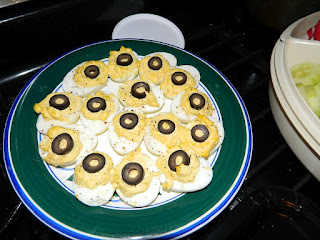 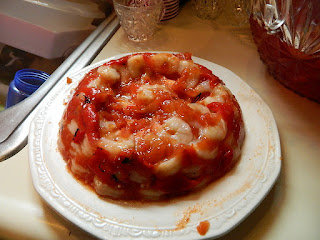 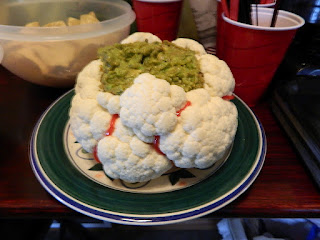 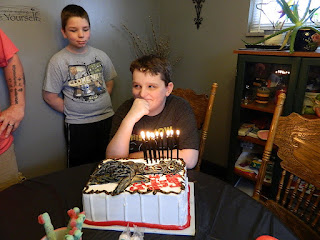 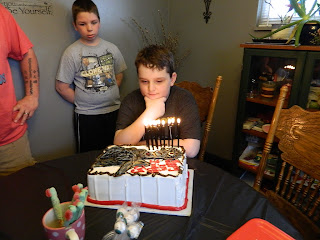 Maria Rosa Sharrow
My name is Rosa and I am a mom to a very sweet young man who keeps me young and on my toes. By day I manage a health food store (which I love doing) and by night or whenever I can find a little time, a jewelry artist. I have so many interests and hobbies that it's hard to find enough time for them all and it doesn't help that I have a touch of ADHD either, if only I required NO sleep.My 2 real passions are making jewelry,not just typical but things a little outside the box,and vintage things. I love to go to tag and rummage sales and thrift shops so many cool things to see and vintage things give me inspiration. Along with my sister I run 2 etsy shops one is mostly Jewelery and such and the other is vintage goodies!